Marcelo Jabulas | @mjabulas – In a year we have already watched productions like Resident Evil 3, Nioh 2, Ghost of Tsushima and The Last of Us – Part II, an indie and monochromatic game, may seem like a grain of sand in the ocean video game (or would it be a coffee bean?). Especially when its graphics refer to early game productions. If we say it sells for R $ 6 on Steam and it was made by one person, chances are the friend won’t move on to the next paragraph. But it’s worth continuing.

Dave-Man has just been released for Windows and Mac OS and it may seem like an unpretentious production, but it is an excellent game, which in its simplicity shows itself as a metaphor for our daily life. In this game, the player takes on the role of Dave, an office worker who is about to retire.

Dave craves online shopping and coffee. It is for these two pleasures that he gets up every day to go to work, always late. This is where the game shines. Because this is a straightforward production, with Pixel Art graphics, game creator Lou Begal (a pseudonym for developer Chris Taylor, who considers his name too common) turned the protagonist’s career path into a Pac-Man story.

This is the way he found to turn the bureaucratic activity of an office into a stimulating game. But the choice of classical arcades and Atari was not in vain. According to the creator of the game (who I had the opportunity to chat with in a fun message exchange via Twitter), the inspiration for the game came from personal experience.

In the game, Dave has to collect the coffee beans like the character Namco did with the bars. However, instead of being chased by the ghosts: Inky, Blinky, Pinky and Clyde, Dave is followed by his colleague Chatty Cathy. If she touches the character, she will surprise him in conversation until the end of the day. That is, at the end of the day, Dave doesn’t get his paycheck and always gets scolded by his boss. 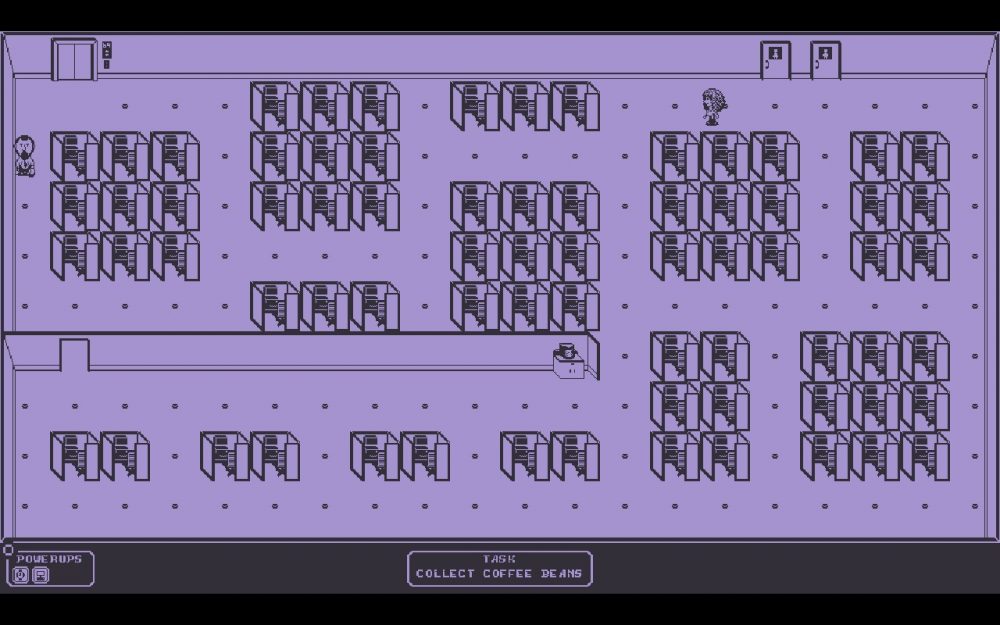 Talyor (Begal) says that a few years ago, when working at a company in Chicago, when he returned from lunch, he was sleepy. However, I needed to complete a task before joining a meeting. To handle it, I would need a cup of coffee. But she noticed that a colleague, an older woman who spoke well, came to her table to chat.

He deduced that if it got to him, he wouldn’t be able to grab his coffee and come back to finish the task on time. So he jumped up from his chair and ran for the coffee maker.

“Obviously, I didn’t go to the colleague I was trying to avoid. But there were only two options. The building I worked in was old, in downtown Chicago. Renovated, but the structure and hallways were the same and sometimes looked like mazes. In short, the direct route to the cafeteria where the coffee maker was located was in the hallway where the colleague was walking. I had to go through a labyrinth to get to the cafeteria, ”recalls the planner.

But Taylor has a caveat: “This former classmate was really cool and honestly I couldn’t think of anything bad to say about her. She was very kind and considerate and wanted to talk to everyone, ”explains the developer, who considers it unfair to think of this colleague in the same way we see the character in the game, who is the antagonist.

Before Dave-Man, Lou Begal (Talyor) had devoted himself to Lou Bagel’s Waffle Bar, a kind of cover of Tapper, this game of clerk, who must deliver beer mugs to customers. The production encouraged the developer to think about a more ambitious project. And it was from there that he started the game project, and did everything himself, except for the soundtrack and effects which was in charge of musician Scowsh Molosh from Manchester.

At the end of the day, Dave returns home. There, his wife is preparing dinner. Until the food is ready, he can consult his computer, where he can buy furniture for the house and fill his collection with books, on the most diverse subjects. But Dave’s life is busy, so much so that many packages are only unpacked on Sundays, when he has a day off.

The whole is strewn with small acid dialogues. In the office, Dave can meet a colleague at the water cooler, who gives advice on what to buy on the computer. It’s possible to buy costumes, watches (which stop time), and even a device that makes noise and catches the attention of Chaty Catthy.

If the player wants a faster game, he can opt for Arcade mode. This mode puts the player in the office, scooping up coffee beans and running away from Chatty Cathy, without the homecoming and other moments of the character’s daily life.

Dave-Man is an amazing game. It’s simple and complex at the same time. The story of the character, with his melancholy daily life in the perpetual rhythm of our lives, in search of small pleasures that we can not always enjoy.

Doom Eternal Review – Fast, Bloody, and Merciless, Like Every FPS Should Be