Marcelo Jabulas | GameCoin Newsroom – The other day I posted a text about the commotion about the arrival of Days Gone. Many people shouted that the game was repetitive, had a lot of bugs. But the problem with the game was the expectation regarding the production. Everyone wanted a spiritual successor to The Last of Us. However, between Bend Studios’ game and Naughty Dog’s masterpiece, there’s only one similarity: surviving after an epidemic that devastated the civilization. Otherwise, they are completely different games and with very different proposals. 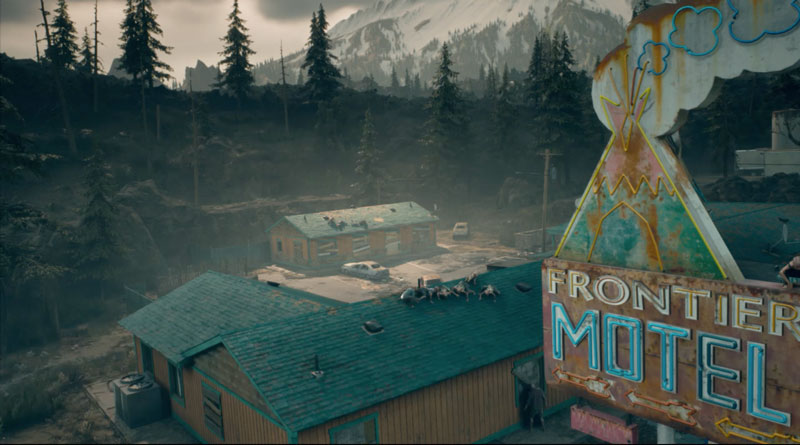 Days Gone is an Action RPG by function, although many missions enforce linearity, the player has complete freedom to roam around the huge storyline where the plot unfolds. It’s quite different from The Last of Us, which is a story-driven adventure game with no right to come and go where and when you want. But let’s leave those comparisons aside and get straight to the points that make DG worth playing.

Deacon is the protagonist of the story. He is a biker and belonged to a gang until the world fell apart. He’s a badass, but with strong values ​​of loyalty and fairness. Even though he is a earthy man when threatened. 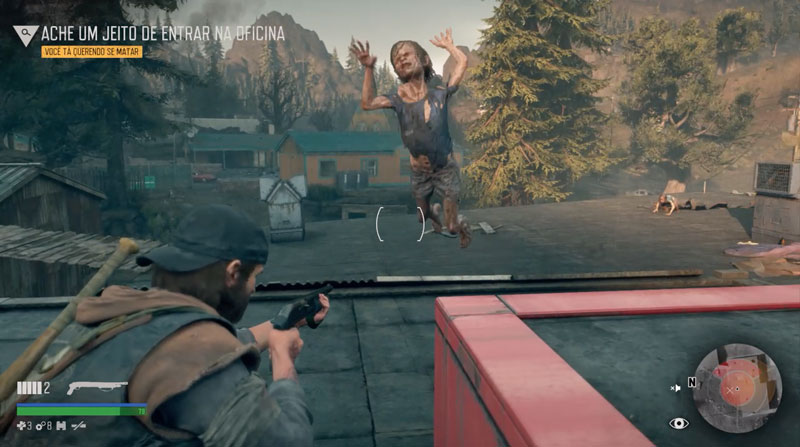 Deacon lives his adventure alongside his partner Boozer. At the start of the game, the protagonist stops running away with his wife, in a rescue helicopter, so as not to leave behind his friend, but promises to find his mistress. It turns out two years have passed, and the two are living off odd jobs and besieged in an observation tower. 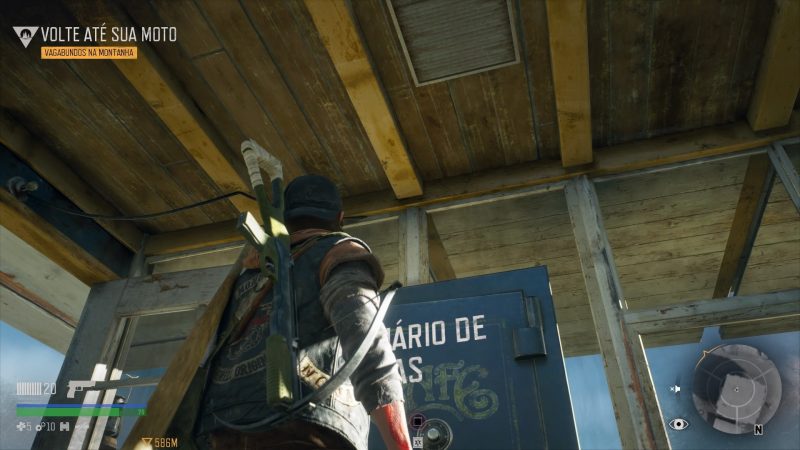 The protagonist is an interesting guy, knows how to follow and uses a crossbow, like Daryl from The Walking Dead. However, his look is far from that of Norman Reedus. A funny thing is that Deacon is a grumpy guy. 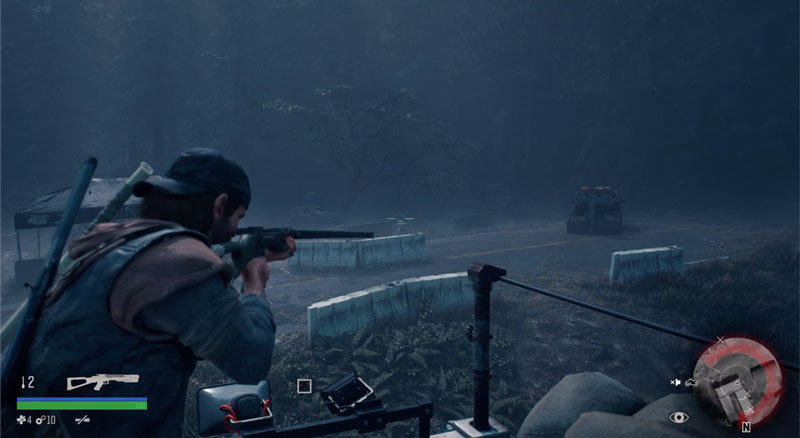 He is always cursing, cursing and scolding everyone. He claimed it all, height, delusions, rippers, bums and even his physical condition. These are elements that create a bond of sympathy between the player and the character.

The game map is huge. And you can’t fool around. After all, those who are alive want their meager possessions and also their guts. And the only way to move quickly and with a minimum of safety is by motorbike. Everyone likes to use Sons of Anarchy as a character analogy, even I quoted the Netflix show, in the past text. But honestly, I’d rather make an analogy with Harley Davidson and Marlboro Man, simply because I’m already 40 and still remember Mickey Rourke before he became Bowser (from the Super Mario movie) in real life . 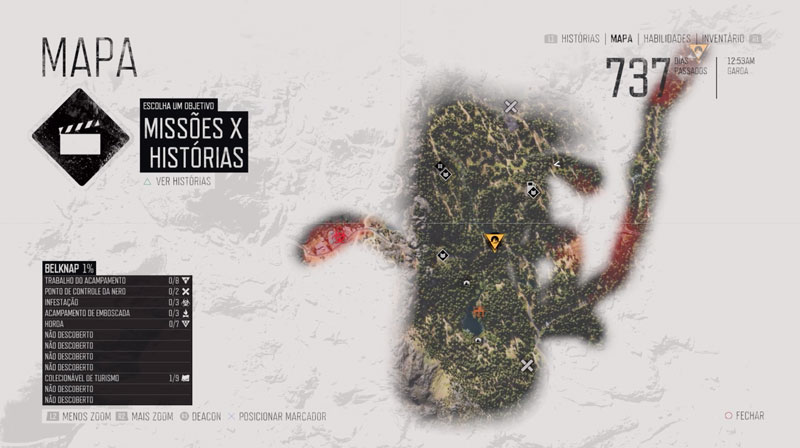 The problem is that Deacon’s bike is stolen and disassembled. And so as not to be on foot, he got himself a dented bicycle. But it is she who will save the skin of the protagonist during the game. 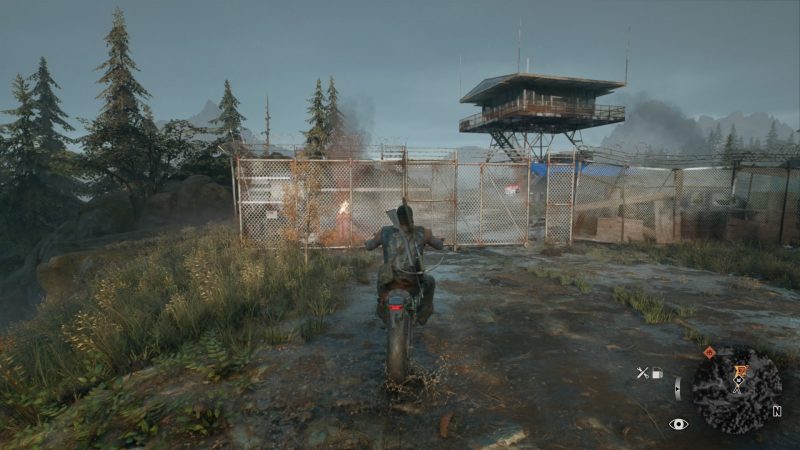 Those who follow The Walking Dead, Zombie Nation, and other shows that portray this zombified reality, know that gasoline doesn’t fall from the clouds. In the game, the protagonist’s motorcycle must be constantly replenished. Running out of gas, in addition to dropping you and exposing you to hordes of frenzy, is also responsible for finding fuel for lean.

Therefore, the advice is to use it when traveling long distances. Near the refuge, it is better to go there on the big toe. Another thing, the toothless only works when the gas is exhausted. Descend using gravity, if you have fuel it will consume.

During the campaign, the player can make improvements to the motorcycle. For this, you have to raise money with the sale of plants, skins and other trinkets that can be found along the way. Besides, the poor thing needs to be fixed. You can even knock down enemies with it, but it will cause damage and might break.

Deacon and Boozer no longer have a gang, but that doesn’t mean the gang hasn’t left them. The game features a wide variety of combat. The coolest thing is that each Dualshock 4 button activates a weapon. For example, if the player presses L2, they will aim their primary weapons (rifle, shotgun, machine gun, or carbine) as well as the pistol and crossbow. 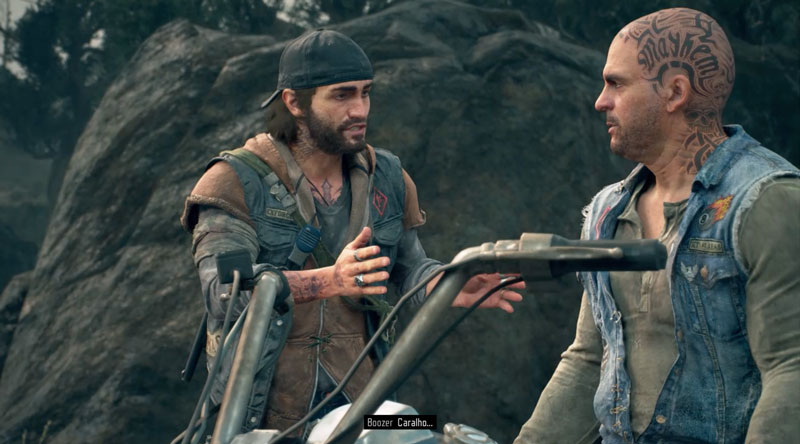 But if he decides to press R2, he will use his melee weapon (knife, stick, baseball bat, machete, axe). If you use L1, it will go to the throwing weapon (Molotov cocktail or grenade). All this facilitates the struggle for life. 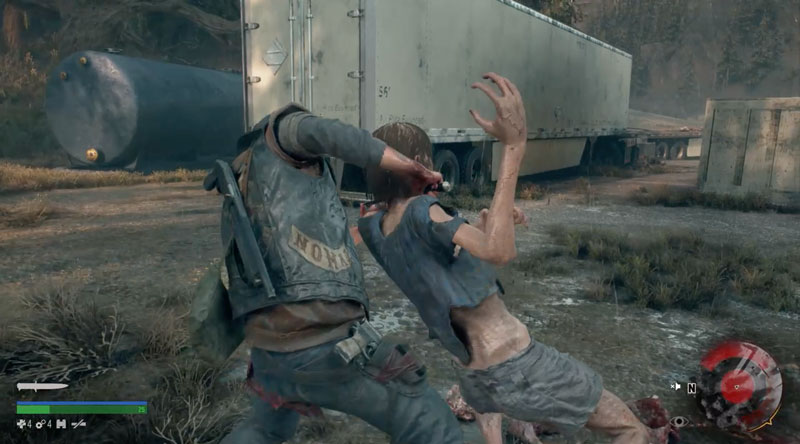 The player can also upgrade the weapon. Throughout the storyline, there are plans to upgrade weapons, like in Far Cry: New Dawn. It is therefore possible to make a bat with nails. It is not yet known if it is also possible to braid barbed wire in a club, as in Fallout 4.

One of the annoying things about living in a world with no laws, no taxes, and no capitalism is that delivery services went downhill from there too. Thus, the player must collect scraps, rags, and whatever else is needed to stay alive. Many items are used to create explosives and bandages. Others are for making money. 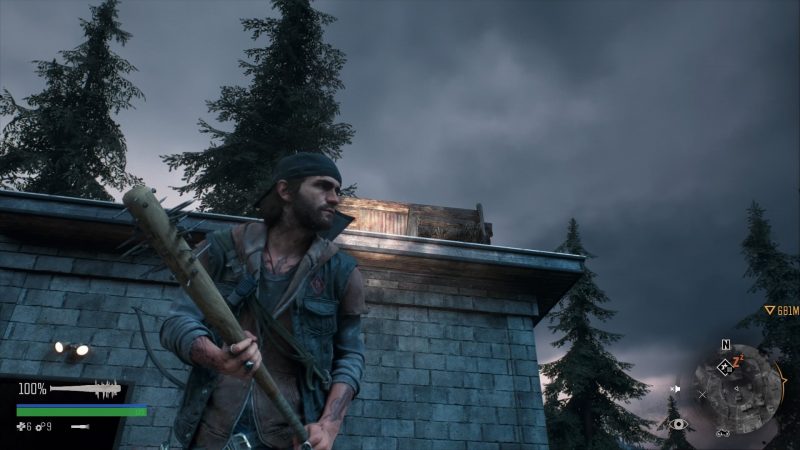 During the game, Deacon will find different weapons such as machetes, axes, clubs and planks. These melee weapons have little durability, like in Dead Island. The problem is that Deacon supports one at a time. So sometimes it’s better to go for the club that lasts longer than the studded club that’s about to break in half. 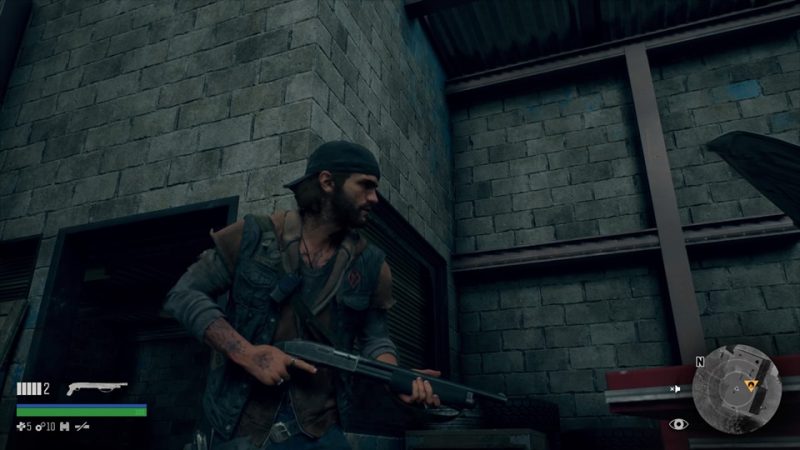 In the case of firearms, the protagonist will always have his pistol slung over his shoulder. He can carry two additional weapons: a primary (shotguns, rifles, shotguns and machine guns) and also a special, which is the case of the crossbow, or a long range rifle. Since ammo is scarce, it’s always worth going for the weapon that has the most shots. There’s no point in wanting to pay for a Terminator and just spitting soap bubbles. 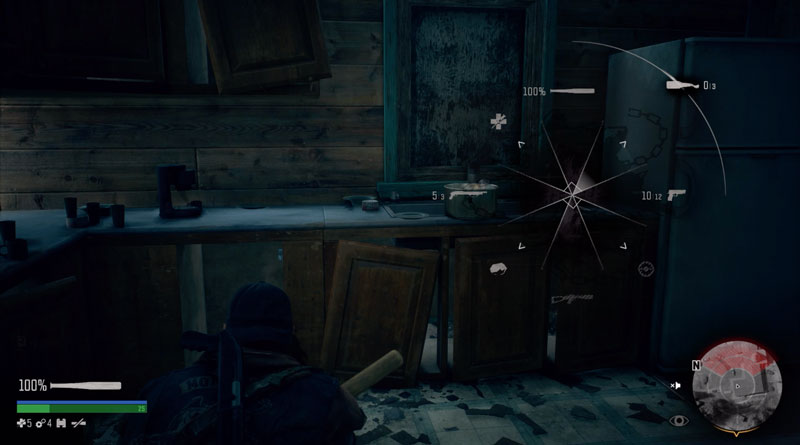 However, there are stores in the camps that allow you to buy weapons and deposit them in lockers. Therefore, the player can change trebuchet whenever he wants and not just depend on what he finds along the way.

Frenzied are the zombies of Days Gone. Unlike the undead in The Waling Dead who are slow and sluggish, these are more agile. They remember Creatures and World War Z, Zombie Nation and I Am Legend. They move quickly and attack in packs. Coming face to face with three or more Frenzy doesn’t always end well. 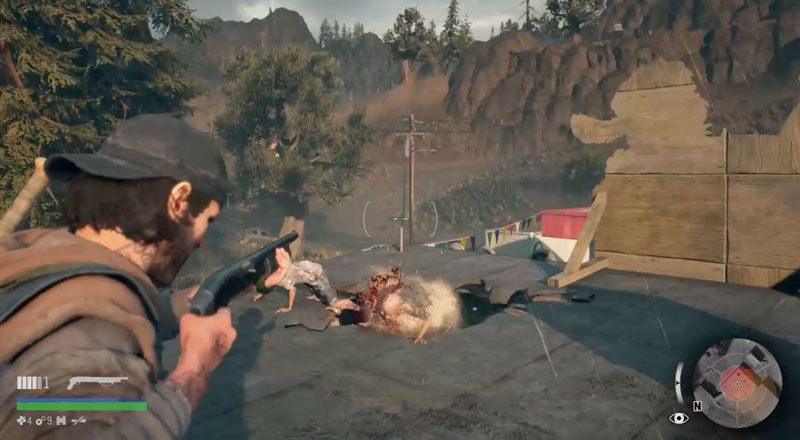 The Rippers, on the other hand, are a crazed bunch, reminiscent of the maniacs from Far Cry: New Dawn, along with the crazies from Borderlands and Rage. They are bloodthirsty types who set up ambushes to kill and loot. They look like TWD’s Saviors, with the sadism of Simon but without the sarcasm of Negan. 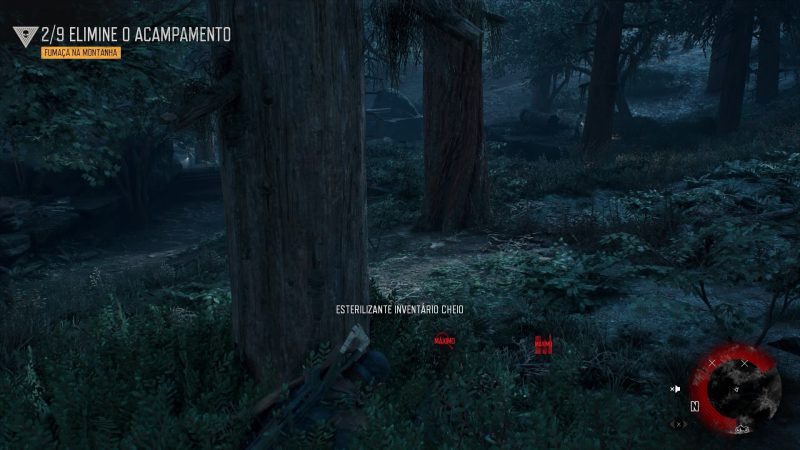 Wanderers are cowardly subjects who live in small groups in the forest. Their business is raiding camps and they are quite hostile when threatened.

Days Gone is an interesting game, one that may have been tarnished by the huge expectations created over the four years of its production. Often the tasks can feel repetitive, but let’s be honest, the day-to-day of those who have to survive day in and day out shouldn’t be much different. And another, kill or be killed all the time must be pretty electrifying.

And even if there are no titanic monsters, supernatural powers or infinity stones, it is a game that generates great immersion and empathy with the characters. The player suffers from Deacon and Boozer’s anguish. The dialogues are excellent and the voice acting is very well done. All of this takes the player into the plot. 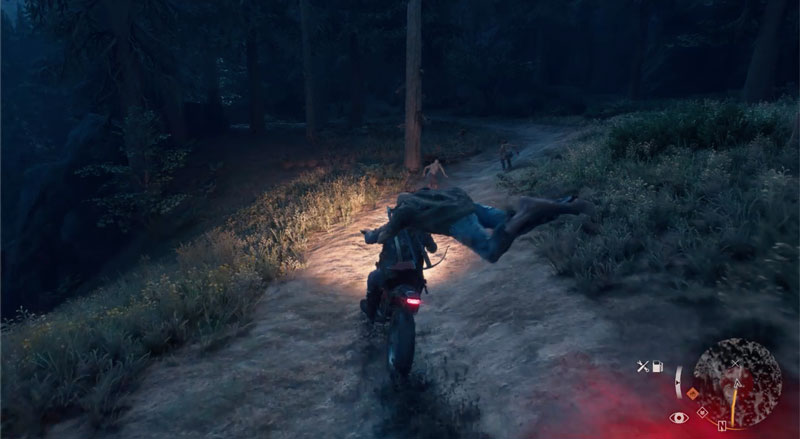 When the motorcycle runs out of fuel, or when the protagonist is the target of an ambush, there is always this butterfly in the stomach accompanied by a snap: “fudeu!”. These are elements that transport the player into the story. You suffer with the guy and hope he can save himself.