Marcelo Jabulas | @mjabulas – When PC games started to gain popularity in the second half of the 1980s, countless simulators of anything imaginable emerged. It was a game of farm, anthill, planet creation, as well as surgery and even car factory.

This was all possible because computer programming was affordable, didn’t require squeezing games onto cards and chips, or making cartridge cases, plus having to get project approval from the owner of the system. It was enough to create and write to a floppy disk.

Today, almost 40 years later, that imprint remains firm. There are studios dedicated to the creation of computer simulators of the most different themes, such as “Lumberjacks Dynasty”, in which the player assumes the role of a lumberjack.

Producing a logging game can seem contradictory, especially in Brazil, where illegal logging is eroding the Amazon. But the game makes no excuses for the Tupiniquin loggers. On the contrary, the title takes place in North America and follows the model of legal mining. Your character can only cut the authorized tree.

The game, with a vision that alternates between first and third person, is much more realistic and polished than the old simulators of the past. It is as if the player is using “Far Cry 5”, but instead of a machine gun, a chainsaw.

The story of the game is very “Sessão da Tarde”, the player receives the invitation to take over the business operations of the old uncle. He gets off a bus, greets his aunt and goes to meet the old man.

The story may seem pointless given the action of the game, but the point is, the player isn’t just chopping down trees. He is involved in the development of local society. He’s the typical good boy, always willful.

At the start of the campaign, the player can choose between a character capable of manual labor and stronger, or one more adept at conducting business, but without the same physical strength. In practice, this means that the “root” lumberjack cuts trees faster and the management style is better to improve the structure of the logging company.

The great thing is that the game tries to demonstrate in practice the process of those who make a living from cutting wood. The player must find the right tree for extraction, which are araucarias. After passing the chainsaw, it is necessary to clean the trunk, chipping the branches. 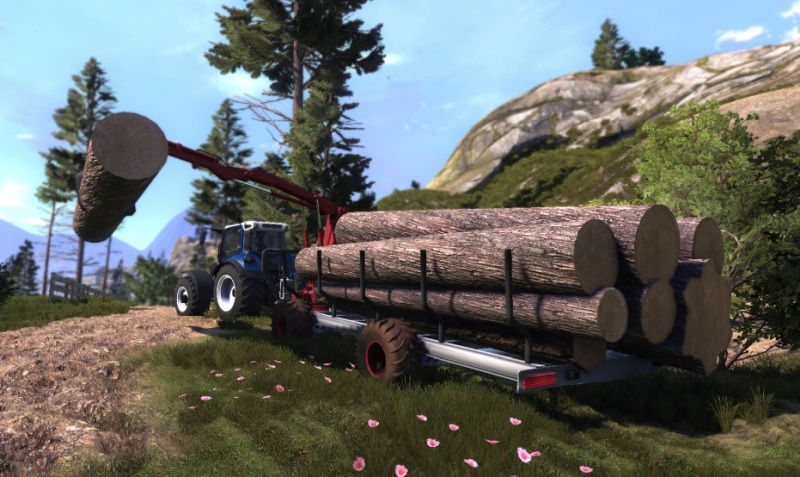 Then you have to pick up the log with a mechanical arm and place it on the cart. Then it is transport to the point of delivery. It all takes a long time at the start of the campaign. Finding the cutting location, positioning the tractor, and operating the vehicle require training. Nothing is impossible.

Felling the tree is the easiest. Just fire up the chainsaw and scream wood. The game even gives us a dimension from which it rushes to eat acres of forest, as happens in the Amazon. Simply pull the rope that starts the engine and let the machine reap centuries of Mother Nature’s work.

But the game goes further. The player has to upgrade the warehouse, upgrade the machines. After all, one of the goals is to make your uncle’s business profitable again.

I admit that at the beginning there was a certain uneasiness in playing at chopping down trees, at a time when forests were being deforested on an apocalyptic scale. On the other hand, it would be immensely demagogic, since we spend our lives playing games the objective of which is to strafe human beings.

It is part of this field of experimentation that computer game producers have been practicing for nearly four decades. These simulators of the most varied themes that clash with profitable genres in the industry must be valued, as they go beyond the common sense of games, be it shooting, racing or soccer games.

PES 2022: we tested the pre-alpha version